Best Locations for Spotting Wildlife in The Catlins

The Catlins is home to The World’s rarest penguins the “yellow eyed”, and The World’s smallest the "little blue”, the planet’s most endangered sea lions and the smallest dolphins! Here is our list of the top spots to view wildlife in The Catlins:

Walk out to the 1869 lighthouse at Nugget Point perched above the famous rock formations. Stop at the first viewing lookout located just above the car park and look for the fur seal colony below. You can often see seals below the lighthouse along with a range of sea birds. Next stop is Roaring Bay penguin hide where you may be fortunate to spot the very rare yellow eyed penguins (hoiho), thought to be The World’s rarest and most ancient penguins with just a few thousand in total. The best time to see them is late in the afternoon once they come back to nest after a day’s fishing.

Note: You can also take a Sunrise Tour with Catlins Scenic and Wildlife Tours who will take you to see Yellow-eyed penguins going out to sea from a private location. 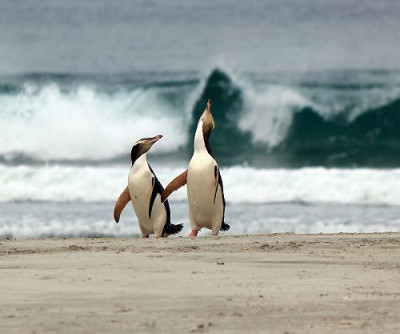 Onwards to Cannibal and Surat Bays which are renowned as some of the best places to see New Zealand Sea Lions in The Catlins. A marked walkway through the dunes connects these two beaches.

New Zealand sea lions are the most endangered and threatened in The World.

Head to Long Point and Jack’s Bay for more opportunities to see penguins, seals and sea lions. The Long Point Reserve is run by the Yellow Eyed Penguin Trust and Department of Conservation.

Purakaunui Bay is not only a popular campsite and surfing spot, the bay is home to many local sea lions too. Tahakopa Beach which you can find from the Old Coach Track at Papatowai, where sea lions and penguins turn up to enjoy the solitude.

The area is well known for its fantastic birdlife and song with lots of the terrific tuis. Tui in The Catlins — Image by: Wilma Sharp

Curio Bay is home to a 180 million year old Jurassic forest, one of only 3 accessible fossil forests in The World. It is a popular spot to see with Hectors dolphins. You might even get the chance to swim or surf with them at Porpoise Bay.

Always respect the wildlife you see in The Catlins - we recommend that you don't approach or disturb these animals, remember that this is their home.